Back in November 2018, the Bank for International Settlements (BIS) published a study of “zombie” businesses. Looking at the 32,000 publicly traded companies in 14 advanced economies, they found 12% were both:

"Do you really think this is NORMAL: Corporations borrow money at 0% to buy their own shares!?"

Real Danger always comes out of a corner nobody expects it to come. The odds that the Great Depression gets fired up by the Corporate sector and infects the Financial sector and the Banks are extremely great. If we’re lucky, it will occur gradually, but more likely, given high leverage and interconnected markets, it will happen fast...extremely fast. So fast that it will be very hard, if possible at all to adapt.

Junk Bonds -The Achilles of the Financial system - Higher we go!

Note the 3 months Treasury Bill yields ZERO percent...just like during the Great Depression of the 1930s 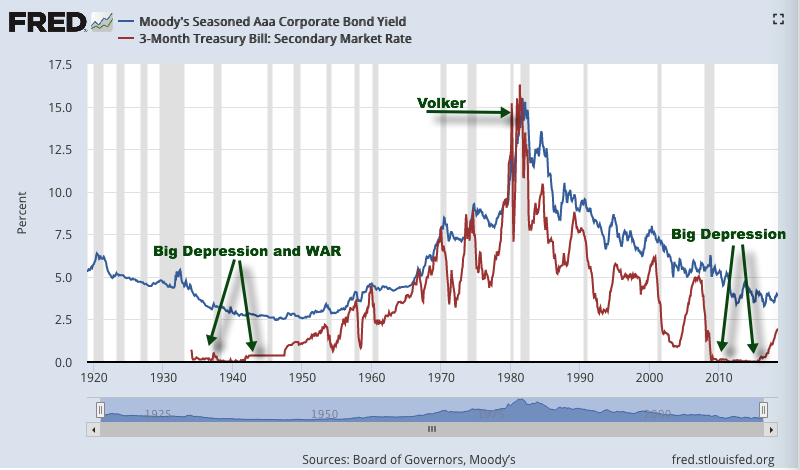 May 31 (Bloomberg) -- A majority of General Motors bondholders agreed to support a plan to exchange their debt for an ownership stake in the company as high as 25 percent, the New York Times reported, citing people familiar with the matter.
Investors holding a little more than 50 percent of GM’s $27.2 billion of debt agreed to the swap, removing the last roadblock for General Motors to file for bankruptcy protection tomorrow, the paper said.
Bondholders will initially get a 10 percent stake in the company, with warrants for an additional 15 percent, the paper said. GM scheduled a news conference tomorrow in New York, where it’s expected to make its bankruptcy filing, the Times reported.
General Motors stock fell to 75 cents on May 29, below the $1 minimum normally needed to trade on the New York Stock Exchange and the lowest level in 76 years.

Currently, high yield bond spreads anticipate a default rate of 21% in the U.S. Specifically, record bond spreads are not only due to fire sales but find some justification in the deterioration of credit quality down the rating scale. Similarly, the spike in the projected default rate is in line with the deterioration of credit quality of outstanding debt down the rating scale (Moody’s)

Through the mechanism of Credit Default Swaps, any (low) rated corporate bond could be elevated to a AAA level. One only had to buy insurance. Today the price of this insurance premium is increasingly becoming prohibitive and Financial Institutions which offered these Swaps (AIG) have disappeared.

There is a huge discrepancy between the general price level of Government and Corporate bonds.

Copyright, All Rights Reserved - The contents of this report may NOT be copied, reproduced, or distributed without the explicit written consent of Goldonomic