What is REAL Money?

What is money, and why our current currency system will blow up?

All Real Assets are a hedge against the Government, yet only some assets are movable.  Real Estate will rise during specific periods but cannot be transported if you need to leave. Art is the eye of the beholder, and Diamonds involve opinions. GOLD and SILVER are the only assets that are the same worldwide and known for what they are. The handicap of Silver is that it is a lot more bulky than Gold: 1 oz. of Gold stores as much Money as 1 kg of Silver.

The price of some Real Assets has the bad habit of coming down during recessions. Real Estate and Capital Goods (High Order Capital Goods) are good examples. Just because it cannot be moved, Real Estate is, as a rule, an easy tax cow for Authorities.

When the price of everything is rising (like what happened over the last decennia), it is, in fact, the value of the Fiat Currency coming down because too large quantities of it have been and are increasingly created. This is a direct consequence of the law of Supply and Demand: the more supply (of currency), the less it is worth. Prices rise not because of the demand for goods and services changes but simply because the currency value drops.

Ever since 1971, currencies have been manufactured out of thin air. Whichever standard (shells, land, cattle, camels, gold, silver) is used, each time Government falsifies the system so it can pay for its mismanagement and spend more than what it earns to get re-elected.

Historic Gold failed as a currency because the government debased the currency:  the coins' content of Gold/silver was lowered. Next, we had a Gold Standard where Governments printed more receipts (currency) than there was Gold at an official fixed price, and finally, in 1971, the Gold window was abandoned. Money could, from now on, be created out of thin air….

Most don’t realize that since 1971 the monetary system has de-facto become a SELF-DESTRUCTING entity and that it has become harder and harder to keep the patient alive. Because today’s monetary system is thriving on fiat currency, not even a balanced budget can solve the resolve the problem we are in. Politicians and Bankers have been playing God, and society will pay direly for this.

To understand why the system will collapse, one must understand the implication of today’s money, which is created out of thin air, and the relationship between Money, Debt, and Interest.

You can create infinite quantities of money but only so much DEBT. As soon as the level of Debt gets too high-Interest Rates always start to rise dramatically, and the requested additional amount of fiat money that must be created to pay for this extra debt rises exponentially. This action always results in Hyperinflation.

As money is created out of Debt, interest has to be paid on each created unit. Hence, more money has to be created just to pay off the interest on previously created money.

When you write a check, there must be sufficient funds in your bank account to cover the check, but when the Federal Reserve writes a check, it creates money out of thin air.

Modern Money is, in fact, the end result of a WORTHLESS and CROOKED FINANCIAL OPERATION.  Currency is borrowed into existence. To create money, the Treasury of a country creates a BOND (a promise to repay the funds over a certain period of time and pay interest) and exchanges it for Money (a bad counterfeit check) with the Central Bank (Federal Reserve). The Treasury now uses the funds for its deficit spending and pays for War, Social programs, public works, and government employees…

This is where Fractional Reserve banking comes into play.  For each $ 100 dollars or Euro deposited into your bank account, the bank can keep only a fraction of this money in your account (less than 10%) and re-use the other 90% or more. These funds are loaned out (ex., Car loan) and end up in other bank accounts where the same principle of fractional reserve banking is applied. Each $10 so creates an additional $ 100. (The Central bank creates about 7% of the money supply. The balance, or about 93%, is created by the Commercial banks)

The currency system is imaginary, it doesn’t exist, but it becomes real when you have to give it value. You have to work so you can pay tax which is used to pay the interest, which has to be paid on the Bond issued by the Government out of nothing. Hence as more and more interest has to be paid. The government must collect more and more taxes just to try to balance the budget. Balancing the budget, in the end, becomes impossible as the income falls (less tax income) and the expenditures rise because of the depression…. Authorities have yet to issue more debt/bonds. 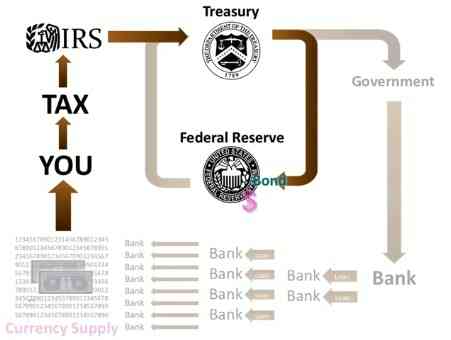 The Achilles heel of this imaginary system is the fact that INTEREST must be paid on the money created out of thin air and that this money doesn’t exist.  Because of this, more money/debt MUST be created each month to keep this currency system alive. In the end, exponential amounts of money/debt must be created just to keep the system alive, leading to Hyperinflation.

Once there is Hyperinflation, people realize that Fiat Currency and Bonds have no value whatsoever and Bonds, bank deposits, or the currency system blow up. Only REAL MONEY survives (Gold, Silver, tangible assets). At this point, the currency supply is contracting, and we enter an era of DEFLATION. Unless DEBT is forgiven, the Deflation cycle makes the Economic Depression even worse as the debt which has been accumulated during the Inflationary cycle must now be repaid with a smaller amount of available money. [This is why in Zimbabwe, at the end of the Hyperinflation, ALL DEBT was forgiven]

" In a Fiat paper money system, the Reserve Bank only creates the Principal - not the usury or interest that it lends to the Government. Therefore, the usury can NEVER be repaid, resulting in foreclosure and bankruptcy".

The end result is also bankruptcy and foreclosure for Governments.

Because of Usury, Fiat money has to be created exponentially to cover the repayment of principal and interest.  The exponential creation of fiat money results in Hyperinflation and the financial system's collapse.

The negative consequences of Usury are minimum when the general level of interest rates is low (like today).  Because the interest was not created but still has to be repaid, at a certain point, money becomes scarce, and interest rates start to rise... exponentially! [this may help you to understand why Authorities are artificially keeping interest rates low].

Usury is a form of non-self-destructing credit. 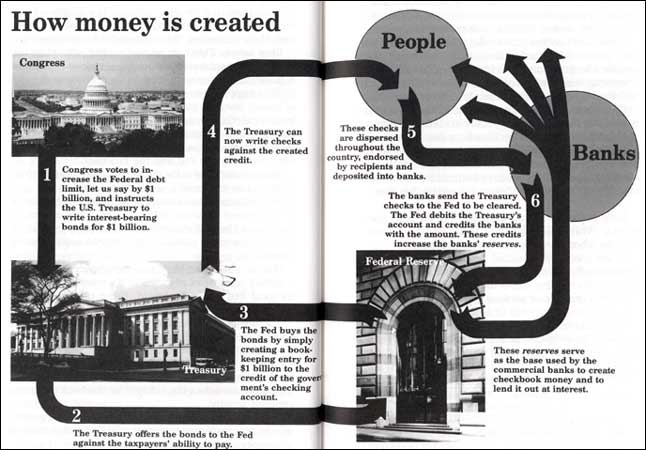 People create money by borrowing money from the bank to buy a home. The amount of money they create is the balance between the price of their home minus the down payment plus the interest they have to pay. A Mortgage is NON-PRODUCTIVE and NON-SELF DESTRUCTING credit.

© - All Rights Reserved - The report's contents may NOT be copied, reproduced, or distributed without the explicit written consent of Goldonomic.

Categories: Will the EU survive? , Money, News, Euro and €-Gold, Investing for dummies