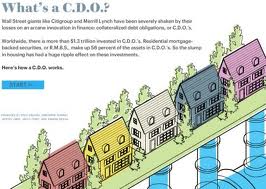 CDO's are only part of the $ 1.14 QUADRILLION derivatives -  click here for more... Derivatives have no fixed set of rules and are traded over the counter and not on a Stock Exchange. They are highly dangerous investment instruments. They are often labeled as STRUCTURED PRODUCTS.

OTC derivatives have multiplied wealth like a fractional reserve banking system, but they’re hollow.  When someone can no longer provide a guarantee, the system collapses or at least part of it does.

This is exactly what happened... 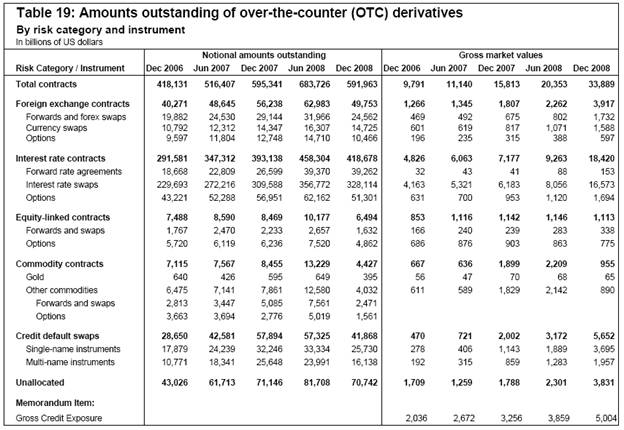 What are Collateralized Debt Obligations?

We all heard about CDO's and the Subprime. However, it is not easy to understand what and how they are. For this reason, we have incorporated a small presentation. CDO's are structured products.

Scroll down for the Federal Reserve charts

The affected banks in Europe.

The LIBOR or the London interbank rate is the interest rate banks charge between themselves. The higher, the fewer Banks trust each other!

Cassandra is back for the new readers and as a reminder for the veterans! - The Credit Crisis Is Going to Get Worse

Twenty years ago, Ted Forstmann contributed a scathing – and prescient – op-ed to this newspaper warning that the junk-bond craze was about to end badly: "Today's financial age has become a period of unbridled excess with accepted risk soaring out of proportion to possible reward," he wrote in October 1988. "Every week, with ever-increasing levels of irresponsibility, many billions of dollars in American assets are being saddled with debt that has virtually no chance of being repaid."

Within a year, the junk-bond market had collapsed, and within 18 months Drexel Burnham Lambert, the leading firm of the junk-bond world, was bankrupt. Mr. Forstmann sees even worse trouble coming today.

For a curmudgeon, he is a cheerful man. When we met for lunch recently in a tony midtown restaurant, he was wearing a well-tailored suit, a blue shirt, and a yellow tie. He spoke with the calm self-assurance of someone who has something to say but nothing left to prove.

"We are in a credit crisis the likes of which I've never seen in my lifetime," Mr. Forstmann warns. He adds: "The credit problems in this country are considerably worse than people have said or know. I didn't even know subprime mortgages existed and I was worried about the credit crisis."

Mr. Forstmann's argument about the present crisis starts with the money supply. After Sept. 11, 2001, the Federal Reserve pumped so much money into the financial system that it distorted the incentives and the decision making of everyone in finance [misallocation of funds-Von Mises]. He illustrates this with what he calls his "little children's story": Once upon a time, when credit conditions and the costs of borrowing money were normal, the bank opened at 9:00 a.m. and closed at 5:00 p.m. For eight hours a day, bankers made loans and took deposits, and then they went home.

But after 9/11, the Fed opened the spigot. Short-term interest rates went to zero in real terms and then into negative territory. When real interest rates are negative, borrowing money is effectively free – the debt loses value faster than the interest adds up. This led to a series of distortions in the financial sector that are only now coming to light. The children's story continues: "Now they [the banks] have all this excess money. And they open at nine, and from nine to noon or so, they're doing all the same kind of basically legitimate things with it that they did before."

So far, so good. "But at noon, they have tons of money left. They have all this supply, and the, what I would call 'legitimate' demand – it's probably not a good word – but where risk and reward are still in balance, has been satisfied. But they're still open until five. And around 3:30 in the afternoon they get to such things as subprime mortgages, OK? And what you guys haven't seen yet is what happened between noon and 3:30."

Straightforward economics tells us that when you print too much money, it loses value and prices go up. That's been happening too. But Mr. Forstmann is most concerned with a different, more subtle effect of the oversupply of money. When it becomes too plentiful, bankers and other financial intermediaries end up taking on more and more risk for less return.

The incentive to be conservative under normal credit conditions is driven in part by what economists call opportunity cost – if you put money to use in one place, it leaves you with less money to invest or lend in another place. So you pick your spots carefully. But if you've got too much money, and that money is declining in value faster than you can earn interest on it, your incentives change. "Something that's free isn't worth much," as Mr. Forstmann puts it. So the normal rules of caution get attenuated [misallocation of funds-Von Mises].

"I don't know when money was ever this inexpensive in the history of this country. But not in modern times, that's for sure."

Combine this with loan syndication and securitization, and the result is a nasty brew. Securitization and syndication allow the banks to take the loans off their books and replenish their capital. They then use this capital to make new loans, which they securitize or syndicate and sell to the hedge funds, which buy them with the money they borrowed from the banks. For a time, everyone makes money.

This circular creation of new credit, used to buy more newly created debt, all financed by ultra-cheap money and all betting with each other, has left the major firms hopelessly intertwined. "It's very interrelated," he says, locking his fingers together. "There's trillions and trillions of dollars that slosh around between all these places and if one fails . . ." He doesn't finish the thought.

"Buffett once told me there are three 'I's in every cycle. The 'innovator,' that's the first 'I.' After the innovator comes the 'imitator.' And after the imitator in the cycle comes the idiot. Which makes way for an innovator again." So when Mr. Forstmann says we're at the end of an era, it's another way of saying that he's afraid that the idiots have made their entrance.

Posted May 29 and updated October 23, 2008 (Telegraph)The debt markets in the US and Europe have begun to flash warning signals yet again, raising fears that the global credit crisis could be entering another turbulent phase.

The cost of insuring against default on the bonds of Lehman Brothers, Merrill Lynch, and other big banks and brokerages has surged over the last two weeks, threatening to reach the stress levels seen before the Bear Stearns debacle. Spreads on inter-bank Libor and Euribor rates in Europe are back near record levels.

Credit default swaps (CDS) on Lehman debt have risen from around 130 in late April to 247, while Merrill debt has spiked to 196. Most analysts had thought the coast was clear for such broker-dealers after the US Federal Reserve invoked an emergency clause in March to let them borrow directly from its lending window...

Latest chart November 2008 - rather scary is the least one can say! 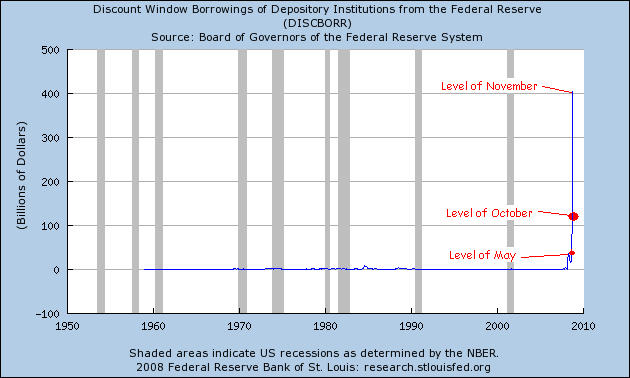 Net Free or Borrowed Reserves are NEGATIVE. Theoretically, it means the banks are bankrupt. Banks need Reserves (deposits) to be able to sell Credit. In other words, they make money by paying less interest to the depositor than they charge to the borrower. With Fractional Reserve banking, they traditionally can lend a minimum of 10 times the deposits they have. What this chart shows us, is that today, there are NO DEPOSITS left. Hence, they survive because they are bailed out by the Federal Reserve. In other words, as the Fed is injecting huge quantities of Fiat Money in order to keep the financial system alive,  this action creates (hyper)inflation. At the same time, because of the CDO subprime and the Credit Crunch, credit (debt/money) is becoming scarcer and interest rates are pushed upwards. 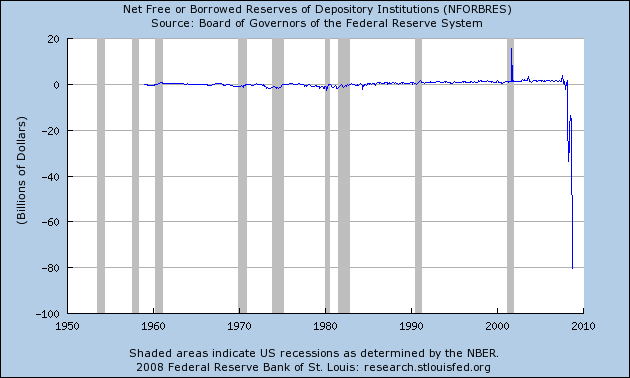 Total borrowings of the financial institutions (banks, brokers) from the Federal Reserve. I don't remember that I have ever seen this kind of situation in my life. Terrifying it is! If you compare this peak with the historical ones, it is rather easy to imagine how much (Hyper)inflation it will create compared to the small blips we saw in the past.  As of June 1st, the figure has gone up to a staggering $ 171 bn! 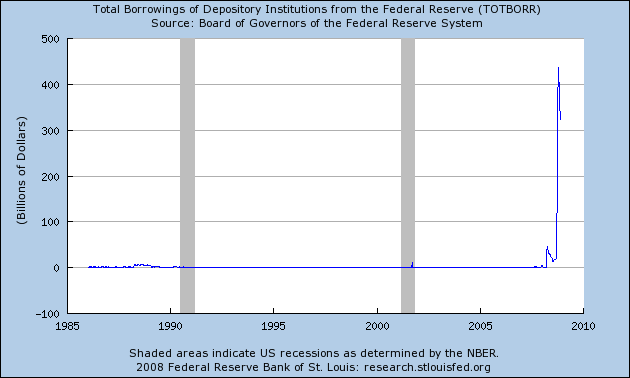