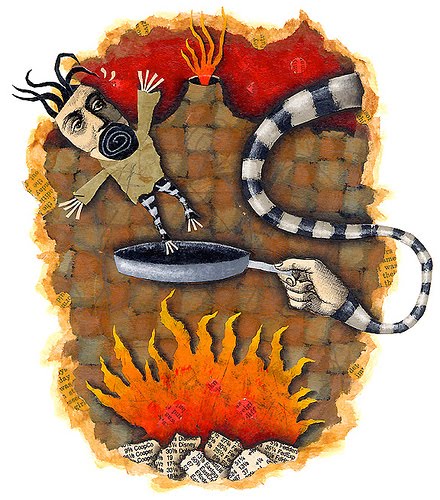 The rule is that at the end of a correction the number of Bearish Advisors always reaches a climax. Logic is that at that time one will also find a record number of articles/advisors explaining why Gold shows a top and why it will crash. The least I can say is that such environment is not a friendly one for the average investor which still thinks of a BANK like our Grand-parents saw the Church. We may have seen the worst scandals of the Church but clear is there are many more to come for the Banks (JPMorgan).

Isolating the chart for Dollar-gold is not such a good idea…For over 35 years I have been practicing technical analysis. Experience is that you may NEVER isolate a chart and that you only get a correct picture if you look at a fairly important number of charts.  And this includes the charts of Currencies and Stock Market indices. As of today Gold still sits in a solid uptrend when expressed in the most important Fiat Currencies (incl. the Renminbi).

Isolating an investment decision from the fundamentals is another mistake many tend to make. Assume you sell you physical gold holdings, what are you getting instead? Make your pick: Worthless fiat money, dangerous debt certificates, euro’s and dollars of which exponential increasing amounts are printed each day, treasuries or Government debt sold at manipulated and stupid bubble prices, bank manufactured investment products using dangerous derivatives? Real Estate or a High Order Capital Good which has either crashed or is about to do so in those places where the cycle has been lagging somewhat?

Isolating an investment decision out of the long term cycle is another mistake. Correct is that 1981 we had an intermediate top for gold. Volker managed to revitalize the belief in the Dollar and the financial system by drastically increasing the interest rates to double digit levels or almost 20%.  Because of the existing communicating financial vessels the money flowed out of Gold and into Treasuries and bank deposits. As a result Gold was knocked KO until 2001.

Volker bought time. But instead of using this opportunity to revitalize and cleanse out the financial system, it was actually used to make it worse and tokick the can down the road: derivatives or a financial weapon of mass destruction, subprimes, credit default swaps, the Glass–Steagall Act was revoked and allowed Bankers to speculate on the financial markets using their customer’s deposits, etc. Hence today the World is in a terrible shape.

Last but not least, don’t we all REALIZE the global economic financial and economic situation today is a lot worse than it was in 1981!? The debt situation of the Western World has levels which are so dramatically high that any hike of the interest rates above 6% results in an instantaneous dead.  This is exactly the reason why central banks are doing the impossible to keep the interest rate level as low as possible AND under the 6% level.

For those who see through the smoke curtains sold by the authorities (which will sell their mother just to stay in power) who have become the Siamese twin of Bankers since without these the money manufacturing game comes instantly to a halt, there really is not any safe alternate for physical Gold. If there is PLEASE let me know!!!

Maybe it is time to listen to your heart and to good reason rather than to what Bankers and Government try to make you believe. If really in doubt, FINANCIAL HISTORY can be of great help. Time to make you home work and don’t forget to keep you saving out of political (remember Argentina) reach! Internet is a GREAT place as long as you can filter the goodies out of the kaff.