SA Rand and US Dollar: 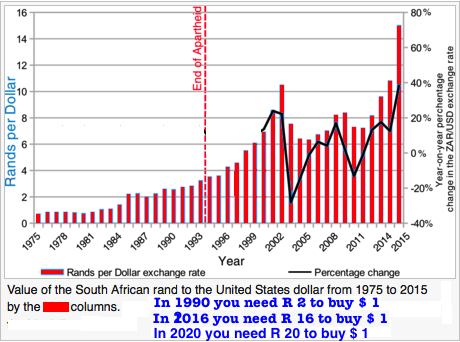 There is a correlation between the exchange rate of the Rand and the nominal price of Gold:

Gold mining in South Africa is still cheap....changing legislation is - in a Zimbabwe pattern - however killing the goose with the golden eggs!

Updated December 1,  2018 - What happened and happens in Africa is a BLUEPRINT of what will happen in any country and on any continent where life is taken over by LOW I.Q. IMMIGRANTS. whether BLACK, MUSLIM, ARAB.

What happened overnight in South Africa during the 1990s (I lived it), is slowly but surely happening in the Western World. Whites will soon be outnumbered.

South-Africa has always been the most European country in Africa. It was also the country that was ruled the longest by white people. Since the sanctions of 1960, the Rand has been a weak currency. In 1960 one could fill up his car with ONE RAND. We did some research about the financial situation of South Africa years ago (1990) as The Mountainlands project was started up and at that time the figures looked rather good. Today they look BAD. Ever since the previously disadvantaged have become advantaged. People with a LOW I.Q. (average IQ of the African population is 70) have taken over South Africa and CORRUPTION and MISMANAGEMENT have become part of daily life. Proof of this we have all over Africa. Up to the 1950-60s the standard of living in Africa was excellent (also for the black population). There were law and order, Medicare for all, and a good infrastructure. As country after country kicked out of the White Colonists, the continent was propelled back to the Middle-Ages. Shit happens if you let a nurse operate a patient!

In the 1970s, South Africa was the world's most prolific exporter of gold. Over the years, industrial decline has seen widespread closures of the mines across the country. However, Johannesburg sits on the biggest gold basin ever discovered. It's perhaps not surprising that many of these abandoned mines have seen a recent boom in illegal mining activity...like we have for years in other African countries.

There is a shortage of COAL required to run ESCOM's electricity plants...and there are no plans for new COAL MINES. (Dec'2018)

The Rand must be avoided by all means. It has become a BLACK COUNTRY CURRENCY. During the 1950s & 1960's South Africa was a modern and prosperous country with NO UNEMPLOYMENT. In those years, - under the rule of Apartheid -  the life of BLACK people was on average better than it is today. The country was destroyed by the Media & Communists during the 1990s. [extremely interesting interview below]. A NAIVE de Klerk gave South Africa away to BLACKS and COMMUNISTS and he did it on a silver plate. Mandela's life brought more misery for all South-Africans: black and white. Norway, Sweden, The Netherlands, the Socialists, the Media can be proud of themselves...REALITY is that Mandela was a COMMUNIST and a MASS MURDERER who killed thousands of innocent women and children. Mandela is the one which has to be blamed for today's GENERAL Black and White MISERY in South Africa.

What goes around, comes around: it was Norway, Sweden, and the Netherlands which engaged most in what they called Anti-Apartheid. ANC members received their Detonators and Dynamite from these countries. It was the USSR that financially supported all ANC members in Europe. Maybe that was the reason why the USSR went bankrupt in 1998 and Norway, Sweden and the Netherlands have seen such a large inflow of Immigrants.

NO African country can and will survive without the receipts of the export of African Commodities: Gold, silver, diamonds, etc... ALL African rulers, how corrupt they may be know this.

Copyright, All Rights Reserved - The contents of this report may NOT be copied, reproduced, or distributed without the explicit written consent of Goldonomic (28 Jan 2018)

@MarcBuergi The masks don't work!!! This proofs it once more!

If sleepy Joe wins the white house, he will do exactly to america what european politicians are doing to europe: destroy the USA

@Goldonomic . Remember the GREEN SHOOTS they tried to sell us some years ago!? ...and never came! Instead, we got this DEPRESSION!!!