Real Estate or a FAIRY TALE for those who don't think!

Real Estate or a  dangerous Fairy Tale during times of Inflation, high inflation, and Hyperinflation.

The Turkish Lira is in freefall and lost half of its value since the beginning of this year and 85% since 2014. Inflation is a bubbling 60%.  Real Estate investors/owners in Turkey are really fucked. Too late to sell a property, sell the Turkish Liras and get the currency out of the Country. We are only a finger away from the situation in Venezuela. Scroll down for more.

Give-away real estate prices we already have in Venezuela where one can buy an upmarket property for only $10,000 to $30,000. We are only a finger away from being able to buy a property for 1 oz. gold coin...Scroll down for more.

Bear in mind that in Venezuela the end of the hyperinflationary depression is still not in sight and that soaring Oil prices are not saving the country. On the contrary, a country with the world's largest oil reserves now has to pay more to IMPORT Oil products.  The situation can be compared to The Netherlands, a country with the largest natural gas reserve in Europe decided to stop the exploitation and import the required natural gas.  Similar story in Canada where instead of exploiting the domestic Oil & Gas fields, the government has decided to IMPORT crude oil from the Middle East.

"In Venezuela, the government seizes your property when you misbehave or emigrate (leave the country for more than 3 - 6 months)".

In Florida, about 150,000 homeowners are about to lose their HOME insurance (May 2022). This means that landlords either will have to pay the outstanding balance of their mortgage in full (something most cannot), or either sell the property. The reason is that the BANKS refuse/are unable to cover the real estate risk of any property that is not insured against a Hurricane and/or Water damage.

The Real Estate Market in the USA really started to smell bad. There is an oversupply, existing owners have problems covering the mortgage, insurance, and tax expenses and there are no/fewer new buyers. This is the recipe for a SEVERE CRASH (a crash that will be worse than the Lehman Bro. crash in 2007-2008)

Real Estate in England, Belgium, and The Netherlands are: you will feel happy (and many will be happy) because you THINK you have something and you think made money, while in reality, you made NOTHING. On the contrary, after 15-25 years, what is left, is an old, outdated, badly isolated house.

This is a Fairy tale for the Alert and Thinking Investors.

Inflation is a more than proportional creation of the money supply. To make it simple and understandable for all Politicians, Central Bankers, and other MORONS out there who cannot and/or refuse to think: once the more than the proportional amount of money has been created, the general price level of goods and services ALWAYS rises and CAN NOT be stopped. Prices raise because the currency is worthless and less. It is that simple!

The fairy tale described below will happen in ALL countries where we have seen this exponential creation of currency. This includes the U.S.A and Europe.

The DANGER is that confusion tricks people into believing the Asset Value has gone up.  To put it in a simple way: at the beginning of the Hyperinflation, the nominal Real Estate prices sometimes continue to go up for some time only when expressed in LOCAL CURRENCY (just like stock markets mostly do). Later in the Hyperinflationary cycle, as soon as people can no longer afford it, the nominal price of Real Estate also crashes. 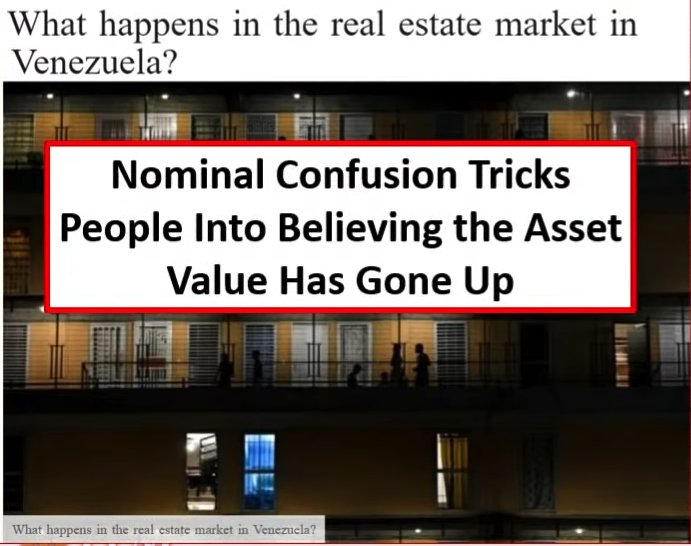 Venezuela, Greece, and Weimar,... are picture-perfect examples of what will happen in the USA and Europe starting January 2022!

The Turkish lira weakened further to 15.9 per USD in May, edging closer to the all-time low of 18.4 in December, as surging inflation and recession worries exerted selling pressure on the risky currency. Soaring energy prices lifted Turkey’s inflation rate to a 20-year high of 70% in April, further pressuring the government’s fragile lira deposit protection scheme amid low reserve levels and large negative real interest rates.

Currency stabilization measures by the central bank failed to contain depreciation, as authorities imposed reserve requirements to ease lending and encourage conversion of foreign currencies to the lira. The moves follow ongoing revisions of the central bank’s policy framework to encourage the permanent “liraization” of the Turkish economy, including extending the tax exemption of corporations converting foreign currency to the lira and hiking the foreign revenue ratio that exporters are required to sell from 25% to 40%.

And please stop pretending this is not going to happen in your hometown tomorrow and please stop lying to yourself and others that Real Estate will save you!  A property bought in Turkey in 2014 at a cost of € 1,000,000, is only worth €/$ 130,000 today...and we are not done. Soon it will be €/$ 10,000 and less like in Venezuela. Nor Real Estate, Cryptos, Stocks, nor Bonds won't SAVE you! They NEVER do. History is my witness!

If you still don't understand what is happening right under your nose, have a look at the pictures below and see how things are unfolding in Turkey. Most investors and 95% of all financial advisors (incl. Peter Schiff) don't understand that the REAL THEFT will not happen because of crashing stock and bond markets, but rather because the CURRENCIES will become worthless. It ALWAYS happened and happens this way.  The same can be said about the Real Estate Markets. Real Estate markets sometimes continue to stay strong, however, "Homes" become worthless because the currency crashes.