Guess what's up for Dinner?

Those of you dear readers with a solid net worth no longer need to wonder who's for dinner - it is you.

Now that a maximum of savers/investors have been fooled and many were so dumb to repatriate their foreign savings and soon both Fiat Money and Securities are almost 100% digitalized the trap is about to close upon them. Even if one wishes to declare foreign savings is it really necessary to repatriate the funds respectively to the USA and/or Europe when a legal solution is possible?  I know Swiss bankers are pushing American citizens and residents to repatriate their savings and that many Swiss Bankers are pushing European cusomers in a similar way...!? Weird is the least one can say.

According to the IMF-officials cutting government spending even a little is verboten, but raising taxes is two thumbs up. Some people were unhappy when french president Hollande, jacked the tax rates on high-income earners to 75%. But as time and propaganda move such will become a daily instrument of left governments trying to cover the bottom of their treasury chests. Polls confirm that individuals with an above-average net worth, along with evil corporations (any company not involved with burning through public money on the false promise of "green" energy) are due to be served as tax deserts. No doubt Populism will applaude this kind of Government action for it guarantees their Free Meals. 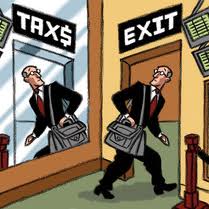 In a reversal of its historic support for unrestricted flows of money across borders, the Washington-based IMF said controls can be useful when countries have little room for economic policies such as lowering interest rates or when surging capital inflows threaten financial stability. Still, it said the measures should be targeted, temporary and not discriminate between residents and non-residents.

IMF Managing Director Christine Lagarde has cited the shift on capital controls as an illustration of the fund's attempts to modernize.

"Capital flows can have important benefits for individual countries across the fund membership and the global economy," the IMF staff wrote in a report discussed by the board on Nov. 16 and published today. They "also carry risks, however, as they can be volatile and large relative to the size of domestic markets."

Note: in 1939 before the real Jew slaughter began, many were still allowed to leave Germany. However BEFORE they packed, German petty government officials paid a visit to the future emigrants and checked that NOTHING valuable was taken along. Those who were caught at the border with undeclared valuables were arrested, could be send to a concentration camp or shot.

The logic, of course, is that once governments around the world see that "everyone" is doing it, they will ratchet up their efforts to trap their citizens' money within their political borders, then squeeze the productive members of society until they bleed to death (capital is consumed).

While there will still be pockets of civilization where people can go to escape the heavy hand, in this world of interconnected governments, those pockets will be few and far between. The trick  is to find these pockets NOW (and believe me, the rule is that they are not to be found in obvious places) and to make the necessary arrangements ASAP.