There is no doubt some alternative needs to be found for Liquid Energy. Nuclear fusion is one possibility and as long as science hasn't been able to manufacture a small fuel/energy cell this could be another possibility...

Nuclear Fusion is the opposite of Nuclear Fission or Solar Energy. In Aix-en-Provence, France one of the world's first fusion plants is being built. Iter is the way to a source of new energy...more

A brave new world of fossil fuels on demand: In September, a privately held and highly secretive U.S. biotech company named Joule Unlimited received a patent for “a proprietary organism” – a genetically adapted E. coli bacterium – that feeds solely on carbon dioxide and excretes liquid hydrocarbons: diesel fuel, jet fuel, and gasoline. This breakthrough technology, the company says, will deliver renewable supplies of liquid fossil fuel almost anywhere on Earth, in essentially unlimited quantity and at an energy-cost equivalent of $30 (U.S.) a barrel of crude oil. It will deliver, the company says, “fossil fuels on demand...more

The world is now so dependent on Oil that even during a major economic crisis the demand for oil has remained on a high level [contrary to the 1980s]. The transitions from Oil to other energy sources will have consequences as important as the appearance of the Steam train and the invention of the Automobile. Also, Complex Societies (the EU and the USA) will not survive the expensive energy

An economic boom becomes impossible unless it has access to CHEAP ENERGY.

Click here to read Tainter for details about ENERGY and ECONOMIC cycles.

On Aug. 14, 2009, the International Energy Agency released a report based on a study on the oilfields that make up 75 percent of world supply showing that not only is production declining but it is declining at double the rate of just two years ago, now 6.7 percent per year. The IEA concludes that for the first time in history supply, not demand is going to drive prices. November 2009 an IEA official admits the figures have been tricked in order to avoid panic.

In other words, though demand has dropped dramatically due to the economic collapse, the oil industry is struggling to meet even the reduced demand, which is why prices have risen so quickly.

Oil is a REAL COMMODITY in short supply. 70 % of the US oil consumption is imported…for the 1st time in history, the consumption curve has penetrated the production curve eating up the inventories. A critical point has been crossed. Contrary to what a lot of people think, Global Demand keeps rising by 1% per year and supply is coming down.

In November 2008, the International Energy Agency (IEA) released its World Energy Outlook report. According to the IEA, our existing oil fields are depleting by a shocking 6.7% per annum and we would need to find an additional 60 million barrels per day of new oil supply in 20 years to meet global demand.

We are reasoning about LIQUID ENERGY. Solar, Wind, and nuclear CANNOT be used for automobiles, trucks, ships, airplanes, motorbikes, and grass mowers [except for ships where nuke has been used for many years in Subs and Russian Ice-breakers] 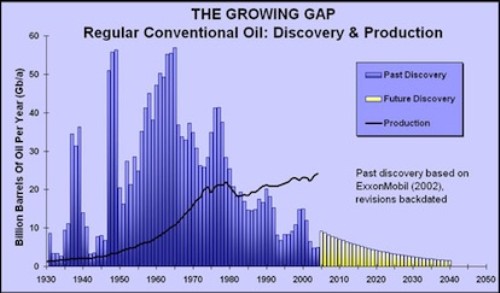 The world will struggle to meet oil demand [By Carola Hoyos and Javier Blas in London] Published: October 28, 2008 - Output from the world's oilfields is declining faster than previously thought, the first authoritative public study of the biggest fields shows.

Houston we have a problem: The U.S., with 5% of the world's population, uses 25% of its global oil supply.

The typical American, in other words, might be compared to an elephant, while the average European or Japanese (to say nothing of the average Chinese or Indian) might be likened to, say, a deer.  The elephant needs an enormous amount of food merely to stay alive;  if it is restricted to the amount consumed by the deer, the elephant will die.

We have for the 1st time entered an era where demand for oil is larger than Supply. Crude oil prices are in a secular uptrend as the shortage between supply and demand is compensated by stocks. But the day is close these stocks will be depleted and demand will have to give in. The Western world is already burning less liquid energy. The Far and the Middle East are over happy to use the balance.

Talking heads still don’t seem to understand that the Oil prices ain’t rising in a context of falling demand and rising supply and higher stocks. What we see for Oil is exactly the opposite. Those waiting for an oil bubble like a credit bubble, a housing bubble, and/or a real estate bubble are going to be deceived. [just imagine what will happen once stocks fall]

We have a paradigm shift. The misallocation of funds that are the result of Fractional Reserve Banking and the creation of money out of thin air is the motor behind the actual and future shortage of liquid energy. Instead of allocating funds to new exploration, drilling, and the modernization of refineries, the funds were used to fuel worldwide Bubbles like those in Real Estate...and like Green, Renewable Energy.

As usual, the political rulers have made it worse than it already was: no licenses were given to built nuclear power stations (today building a nuclear power station costs € 4.3 billion!) and new oil refineries. They simply refused to accept the basic reality that one needs to break eggs to make an omelet. This is a schoolbook example of MISALLOCATION OF FUNDS: money has poured into ineffective Solar and wind Energy programs...which have recently (2014) been abandoned by Germany, Spain,...

Chinese sales of automobiles increased by 73% in only one year (November 2009) time. These cars all need liquid energy or Oil and as we wrote on many occasions, the East is burning each drop and more the West is saving and there is NO DEMAND DESTRUCTION!. China Car Sales Hit 18 Mln in 2010 China's auto industry association said it expects China's 2011 growth rate for auto production and sales to be 10 to 15 percent. China saw both its car production and sales breaking 18 million units in 2010, setting a world record, according to the China Association of Automobile Manufacturers (CAAM). Note: Electric Vehicles will not and cannot solve the problem, on the contrary, they only make it worse.

The decrease in consumption by the Western World is burnt by the Middle and the Far East. (* global demand increase is 1% per year)

"Peak Oil" scares the hell out of me; there is no Plan B and we have left it too late. The chances of increasing production are slim at best due to geology, rusty infrastructure, shortage of equipment, and scarcity of skilled workers. In my estimate, the global supply of oil will drop by 7-10 m barrels per day by 2012 and this is after taking into account new supply over the same period. Not a happy thought and all we can do now is to load up on commodities, pray and hope for the best. " 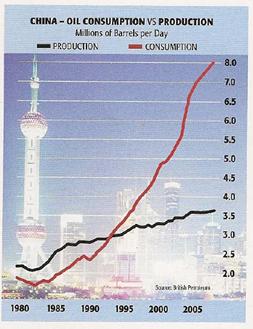 Energy is something very important for the development of an economy and yet, extremely misunderstood. The total energy is the sum of liquid and other renewable energies (like solar, wind, nuclear, electricity). Misunderstood is the fact that there is a fundamental difference between LIQUID ENERGY (oil) that makes engines run and global energy like Electricity.

The Depression of the 1920s-30s saw the end of the age of Coal and Steam and the replacement by Oil. What we are living now, is the end of the Age of Petroleum. It is not 100% clear by what Oil will be replaced. However, because of their inherent characteristics,  it is just impossible for Solar and Wind Energy to fulfill this task.  My conviction is that in the near future, Nuclear Fusion and not Nuclear Fission will replace Oil and Gas and signal the start of the next world economic boom. Hydrogen could also replace liquid energy and be used to run cars, airplanes, and vessels.

An increase in price basically happens in a process to adjust Supply and Demand. Speculation only plays a secondary and temporary role. There is NO DOUBT that this is peak oil: demand is 87 billion barrels per day and supply is only 85 billion barrels per day. In other words, there is a shortage of 730 billion barrels on a yearly basis. To make things worse the inventory levels are below these of 2007.  In other words, we will only see limited price reaction within the secular bull trend. If there is no price reaction between today and July, I expect to see $ 150 per barrel by the end of 2008! In case (hopefully) there is a price reaction, there is NO doubt we shall see this figure in 2009.

December 2008 until 2014, the price of Oil has as a result of deleveraging, the garage sale, deflation propaganda, and manipulation of the PAPER OIL DERIVATIVE MARKET (I hope you don't believe Governments are the nice Altar boys they pretend to be) fallen back to $ 40 (technically a HUGE support line). Financial analysts who only months ago were forecasting $ 300 for oil are now talking of $ 30 and less per barrel. Our opinion is that Crude Oil prices will not be able to fall below the $ 40 support line and that somewhere next year it will take off again once the markets realize the huge mistake they made. 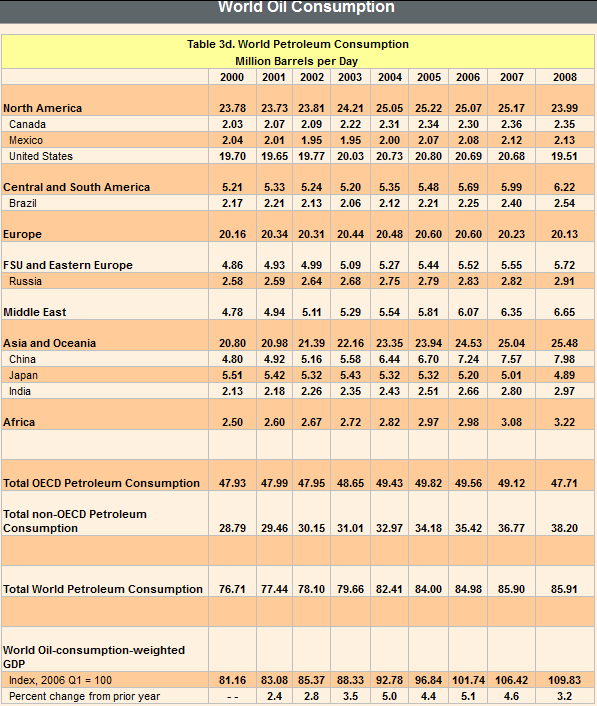 DON'T FORGET TO WATCH THE VIDEO IN THE SECTION PUBLISHED BELOW:  The Pyramid scheme and Peak Oil