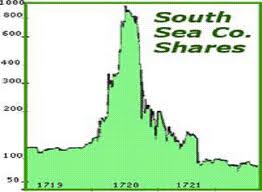 The Mississippi Bubble is partly a story about inflation and subsequent deflation (i.e. misguided monetary policy)...and about a Real Estate Bubble!

French believed Mississippi would make them RICH in no time because they incorrectly BELIEVED there were a lot of minerals (Gold and Silver), the country would grow plenty of tobacco and other Agriculturals. The opposite actually happened...and all investors were ruined. 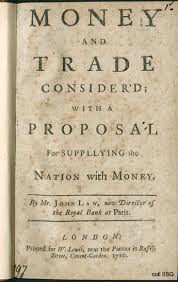 This book embodies Law's scheme for the establishment of a State Bank which was to issue paper money. Law's ideas, rejected by the Scottish Parliament, found acceptance in France. Law, the founder of the Mississippi Scheme to develop Louisiana, a company that gradually gained the whole of the overseas trade of France, was appointed controller-general of French finance. The Mississippi Company at first enjoyed a sensational boom, but in 1720 suffered an equally sensational collapse. Discredited, Law left France, declined an invitation from St. Petersburg to administer the finances of Russia, and for a time took refuge in England. He died in comparative poverty in Venice in 1729.

In May 1716 Law, by royal edict, was allowed to establish the Banque Générale, modeled after the successful Wisselbank of Amsterdam. The business of the bank would be to take deposits and issue banknotes. Equity for the bank came from the sale of stock for both cash and conversion of government debt, the same debt-equity conversion scheme as used in England for the Bank of England, East India Company, and South Sea Company. Capital of the Banque Générale was 1200 shares of 5.000 livres each, totaling 6 mln livres, to be paid in one-quarter currency (1.5 mln livre) and three-quarters billets d'Etats (4.5 mln livre). Billets d'Etats were returned to the State, extinguishing a small part of the national debt. Although the banknotes issued by the Banque Générale were not legal tender (a status acquired later), acceptability was high and the bank's business thrived. Law made his bank notes payable at sight and, most importantly, in the coin current at the time they were issued (effectively an inflation-indexed note). This made the notes especially valuable in the face of repeated depreciation of the currency by the government.

When Mississippi Company share prices began to fall, the regent stepped up his use of force. He confiscated old gold and silver coins in late 1719. A month later, a decree was passed authorizing the search of all homes for concealed coins. A week after that, banknotes were decreed as the official currency throughout the kingdom.

Those who informed their neighbors were rewarded. "They excited, encouraged, paid informers," writes Davis. "Valets betrayed their masters. Citizen spied upon the citizen."

It wasn't just coin holders who lived in fear. In February 1720, the restrictions began to accelerate. Philippe made the wearing of precious stones punishable by confiscation and a huge 10,000-livre fine. Futures transactions were banned. Goldsmiths were forbidden from manufacturing vessels of gold and silver. No person was allowed to have more than 500 livres worth of the coin in his or her possession. In May 1920 it was GAME OVER...