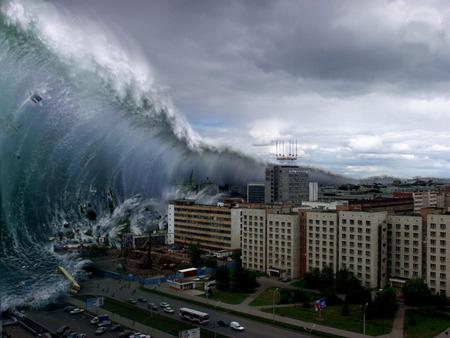 The purpose of big bailouts was to prevent CDSwap explosions, risking a string of bombs to go off. The key aspect of CDSwap contracts is their hidden nature, with fuses intersecting in the dark.

The Credit Default Swaps are capable of burning Hiroshima holes all over the US and European financial system, resulting in US/EU Economic implosion from an eliminated bank and financial system structures almost entirely. The process has only begun but in darkness.

The total size of this market is A STAGGERING $ 63 Trillion! CDS were used by Greece, Spain, Italy, etc...because they allowed to convert something like a bad bond or CCC into a AAA.

If the risk occurs - either the interest or the Bond cannot be repaid, the damage is compensated by the Insurer.  When does notional value become real value? That is, under what circumstance would a credit default swap require financing to 100% of its insurance undertaking? The answer is in default. This is why Greece won't be allowed to go into default...and we shall see Quantitative Easing to Infinity...until the Natural economic forces do what the politicians should do but have not the balls for.

One of the companies which underwrote this kind of insurance (CDS) was AIG. They wrote credit default swaps on the CDO subprimes, Lehman, and other financials that went down…

Domino...domino...House of cards: One of the major mistakes the American authorities made was to let Lehman go bankrupt as this triggered the payment of huge amounts by AIG and its own default.

Credit derivative insurers cannot be compared to life insurers. The reason is obvious: premiums in life insurance are calculated based on mortality tables. People tend to live an average of so many years. Credit Default Swaps premiums are/were the result of an extremely narrow market, misallocation of funds, abnormally low-interest rates and abnormal low premiums. In good times, when nothing happens, all insurers cash in the premiums and make a lot of bucks. In bad times, however, the whole sector suffers and the default of one insurer can become dramatic for another insurer or financial company: if the insurer of a Bond goes bankrupt, the Bond can become insolvent and the financial company carrying it on his books follows...Credit Default Swaps (like most derivatives) is a world where the market is completely in the hands and controlled by 10 large banks: they decide whether a country or a company slides into bankruptcy or not. Not hard to understand that such is an extremely dangerous situation.

BASEL II regulations define how much capital banks must maintain in reserve. Here starts the irony. This is based on the quality of the bank's loan book. Unregulated Credit Default swaps allowed banks to get around the Basel rules.

BASEL III regulations try to adjust for the risk...but the rules are set by these 10 banks and nobody else!

Because of a booming Real Estate market, subprime securities were insured for almost nothing. In those days, the risk of default of a mortgage was very low and if it occurred, the value of the Estate was always high enough to cover for the loss. Ironically, the insurer (ex. AIG) did not have to put up any capital as collateral because this kind of operation is not regulated. The only condition was to maintain a triple-A credit rating.

A computer model decided about the premium, and profits could be booked as soon as the swap was sold. Under these conditions, any bank could (over) leverage itself to the full extent allowed under the Basel II regulations. The insurers could book millions of profit each year without worrying about the collateral. But the profits which were booked never materialized and all of a sudden the default rates on mortgages multiplied and this is how certain securities labeled AAA was, in fact, worth less than the $ 1...the end of the game! The house of cards collapsed and what we saw was domino...domino: AIG, Lehman, Merrill Lynch, Goldman Sachs, ...a financial Tsunami!

Countries like Greece used Credit Default Swaps to become a member of the EU and many municipalities and countries used it for additional income.

In case of a default, the credit default swaps have to work…The ISDA defines what a credit event and a default is. Members of this association are large banks which have actually created the CDS and there is no doubt they will push for more QE and NOT for Default.

January 31, 2012, a potential default is set off by Greece as only a maximum of 30% of the funds will be recovered. If Greece and Greek Swaps are declared a Default, the 5 largest US banks are bankrupt. Five large us banks (JP Morgan Chase, Wells Fargo, Bank of America,… have issued 97% of all credit default swaps.

However, if Greece is not declared a default any other co’s which used CDS to cover the risk is in huge problems because they cannot exercise their insurance. People don’t understand the fragility of the system….and this will be more undercover, unadvertised QE or QE3 and this is extremely bullish for equities in general.

This is how Goldman Sachs and Greece did it: